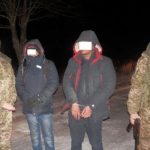 Two illegal migrants were detained late in the evening last night by the border guards of Lviv Detachment near the border on Poland.

The offenders intending to cross the border illegally were detected in the result of information received from the employees of the operational divisions of SBGS. The undocumented men travelling towards the state border in night twilight were stopped 1,5 kilometers before the border by the border detail of Department “Rava-Ruska”.

So far, the detainees introducing themselves as the citizens of Bangladesh were taken to the border department with the purpose to perform filtration-verification measures and draw up administrative and procedural documents.