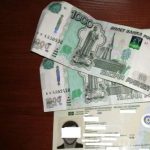 The State Border Guard Service of Ukraine continues systematic fight against corruption. The border guards of Kharkiv Detachment found the foreigner being prohibited to enter the country in the checkpoint “Kupyansk” at the border on Russia, while checking the passengers of the train “Baku – Kharkov”. In order to “solve” the issue of unhindered crossing of the state border the citizen of Azerbaijan, born in 1981, offered the law enforcement authorities an unlawful monetary compensation in the amount of 2 thousand Russian rubles.

The border guards refused to accept the bribe, but this fact was documented. The citizen of Azerbaijan was sent to department of National Police as well as the statement was forwarded as to the wrongful act containing signs of a criminal offense under the Article 369 (offer, promise or provision of undue advantage to a service person) of the Crime Code of Ukraine.

Since the beginning of 2018, this is the eighth documented case when the border guards of Kharkiv Border Detachment were offered bribes by the citizens.