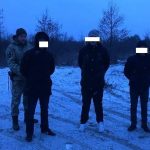 Five residents of the African continent, which in the illegal ways they tried to cross the border of Ukraine, found the staff of State Border Guards Service in the past day.

Three unknown persons, who had rushed from the village Krakovets towards the border on Poland, were revealed by the border guards of Mostyska Detachment last night in Lviv region. In order to detain the violators, the response team started immediately from the BD “Krakovets”, and stopped the travelers 100 meters before the border. They were two citizens of Algeria, born in 1985 and 1988, and a citizen of Morocco, born in 1985. The law enforcers found out that the Algerians were the students of one of the Ukrainian universities, and the Moroccan arrived to Ukraine by plane in the end of January this year.

The foreigners were detained in the administrative order, a judgment in a case concerning attempts of illegal cross of the state border of Ukraine committed by a group of persons, will be taken by the court. The sanction of the article provides for a punishment in the form of a fine in the amount up to 8500 UAH each. In future, the border guards will plead with the court on forced expulsion of the students and their travel companion from Ukraine.

Another travelling girl from Africa, who tried to cross illegally the border of Ukraine, was detected by the border guards of the Separate checkpoint “Kyiv” in “Boryspil”. The citizen of Congo attempted to get to Slovakia by a false French visa. However, she was sent to Istanbul by a back flight.

In addition, the citizen of African continent was found in the airport of Zaporrizhzhya by the border guards of the Berdyansk Detachment. He intended to cross the border by the passport not belonging to him.