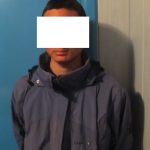 Three men and woman with child were apprehended by the border guards of Bilgorod-Dnistrovskyi Detachment last night in Odessa region for their attempt to cross the border. Two Ukrainians – both residents of border area, together with 34-year-old citizen of Moldova and her 10-months daughter tried illegally to get to the neighboring country beyond the check point “Rozalivka. Evidently, they were detained by the reaction group of the BD “Stepanivka”. Soon, the woman told the law enforcers that she decided to do this as she had lost her documents necessary for border crossing. Detainees were called to administrative responsibility for attempt to cross illegally the border. The woman’s relatives brought her documents from the neighboring country, identifying her and child, afterwards they returned home. One more violator – 23-year-old citizen of Moldova was also apprehended at night by the border guards of the neighboring department “Kuchurhan” at night. Having no passport documents he tried also to return to his country in illegal way. Protocols were drawn up as to the foreigner under the Part 2 Article 202 and 204-1 of Administrative Infringement Code of Ukraine.