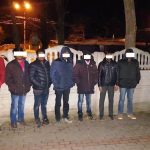 Seven illegal migrants were apprehended by the border guards of Chop Detachment at night in Uzhhorod. Information about the group of Asians stay in the suburb of the town was received by the militaries from the Patrol Police. The border guards started immediately to the mentioned place and in the course of joint actions with Police the foreigners were detained. They had no documents, however, introduced themselves as the citizens of sri-Lanka. Soon, after the interview the detainees confessed that they arrived to Transcarpathia in order to get to the EU countries in illegal way. Illegal migrants were delivered to the department of BS “Uzhhorod” for conducting filtration actions and drawing up procedural documents. Upon establishing all circumstances they will be made responsible for attempt to cross the state border.