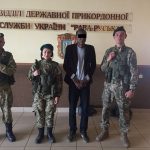 During the day the border guards of Lviv Detachment prevented an attempt of illegal crossing of the state border by citizens of Guinea.

Thus, the border guards of BD “Rava-Ruska”, Lviv Detachment revealed a citizen without any documents 200 meters before the border, who tried to get illegally to the EU bypassing the checkpoints. During the interview, the man reported to be a citizen of Guinea. Administrative protocol was prepared on this fact. The foreigner was delivered to the border unit.