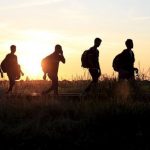 Illegal migration is one of the fundamental threats, which for many years has remained a problem not only for Ukraine but also for the EU countries.

It should be noted that due to its geopolitical location, over the past few decades Ukraine not passing illegal migrants to its territory has become a reliable shield of the external EU borders. It is only since independence the State Border Guard Service of Ukraine detained about 150 thousand of illegal migrants at the Ukrainian border, of which 123 thousand for illegally crossing of the border, and denied in entry to nearly 180 thousands of potential illegal migrants, and more than 40 thousand of illegal foreigners were deported from Ukraine.

It should be noted that the change in the flows of illegal migrants through Ukrainian territory to the Western Europe was preceded by painstaking daily work of the border guards. There were years, especially in 1994-1999-s, when the peak flow of the migrants was more than 65 thousand foreigners. In the next few years, due to the improvement of border protection system there was marked a a decline in illegal migration by 50-70%. However, in 2003-2005, the criminal elements restructured the flows and, as a consequence, there occurred intensification of illegal migration, mainly due to a significant increase of the migrants from the CIS countries. The next few years, the CIS citizens has remained to be the largest category of the irregular migrants. Since 2008 at the borders with EU countries it has been managed to reduce the number of attempts to breach the border by the illegal migrants by 10% in subsequent years a continuous decline in illegal migration is recorded. For example, in 2008, 3,4 thousand migrants were apprehended for illegal cross of the border, and in 2016 – 1.04 thousand.

Note that, as a rule, for the illegal migrants to move via the territory of Ukraine in the beginning they attempted to enter legally by valid document with a different purpose, in particular, education, tourism, business, private affairs. And soon, their further movement was organized to the Western area in order to cross illegally the border. Thus, there are records about the formation of a network of highly profitable criminal business, specializing in the illegal migration, in particular smuggling, production of counterfeit documents of high quality and the organization of transportation. The fight against this transnational criminal network is complicated due to an extensive activities of its representatives in various countries, which for the organization of illegal activities, use advanced communication.

To fully counteract illegal migration in Ukraine the appropriate normative-legal framework in the sphere of combating illegal migration has been established, a variety of public programs has been consistently implemented, coordination of integrated border management is improved as well international cooperation is developed with relevant European institutions and establishments of the EU countries.