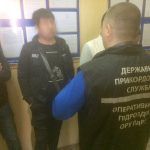 Operations staff of the Southern Regional Department of State Border Guard Service together with the representatives of associated authorities in Odesa region carries out joint actions on illegal migrants’ stay within the territory of Ukraine. In a result of conducted joint actions 13 foreign citizens from Southern-Eastern Asia were apprehended. The foreigners violated the stay rules on the territory of Ukraine being found within the industrial market. So far, the revealed citizens were delivered to Migration Service in Odesa region for preparing procedural document under the Part 1 Article 203 of the AICU (Foreigners and stateless persons’ violation of the stay rules in Ukraine transit travel through the Ukrainian territory).