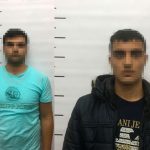 During the past weekend the staff of the State Border Guard Service prevented the next attempt of illegal activity at the border. So, the law enforcement agents of Mostyskyi Detachment detained two foreigners in the checkpoint “Krakivets”, who were trying to impersonate others, using forged passports. It was managed to identify the violators due to the vigilance and experience of the border inspector registering the passengers from the regular bus traveling to Germany. The border guards’ attention was drawn by two Bulgarian passports of the men not beign distinguised from the rest of the tourists. In the course of the expert researches of the passport documents performed by the special equipment, the border guards found out that ID pages were replaced in the Bulgarian passports. This was noted by a number of specific features, although the “work” was done very skillfully. Subsequently, during the conversation the men admitted that they were the citizens of Turkey, 1996 and 1999 YOB, and showed their real passports. The foreigners were not passed across the border, and were detained for attempt to cross illegally the state border. Also, as they used forged documents the border guards informed the staff of the National police of Ukraine.

In addition, the border guards of the Separate checkpoint “Kyiv” at the checkpoint “Boryspil”, found the passport of one more Turkish citizen during the registration of the passengers from the flight “Kiev-Dusseldorf”, which contained the replaced page with constituent data.

The person was identified, the protocol was drawn up under the Article 204-1 of AICUA and submitted to the National Police, the case was sent to the court.