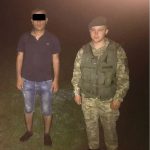 The violator attempting to to illegally enter Hungary was detained last night by the border guards of BD “Horonhlab” of Mukachevo Detachment assisted by the employees of the operative division. While checking the available operational information, the soldiers detained 26-year-old foreigner without documents on the outskirts of the village of Shom. In the course of filtration activities the border guards found out that this had been not the first attempt of the foreigner to cross illegally the border. In April 2017, he tried to get illegally to Slovakia.

So far, the foreigner is taken to the Temporary Detention Facility. The Protocol on administrative infringement was prepared as to the offender under the Part 1 Article 204 -1 of AICU. The case was forwarded to the court.