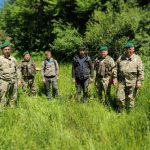 District inspector of Border Guard Service “Smilnytsya” received warning information about unknown persons appeared in the area. The border guards started the search of the strangers at the assistance of the reaction group and reserves of the subdivision. Later on, the law enforcers detained two men with document of the Turkish citizens in the suburb of border village two kilometers before Poland. The foreigners, born in 1990 та 1991, confirmed their aim to cross the state border beyond the checkpoint in order then to get to the countries of European Union. The foreigners were detained in administrative order. The court will make a decision on their case as to illegal cross of the state border Ukraine committed by the group of persons.

It will be recalled that from the end of April there are actions performed on joint special border operation “Border-2018”. Since the beginning of this operation the border guards of Mostyskyi detachment in 14 cases detained 38 trespassers.