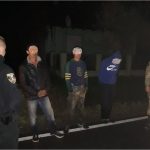 During the night patrol the border guards of BU “Velyka Palad”, Mukachevo Detachment noticed the unknown persons moving towards the state border. The soldiers immediately began to pursue the offenders making several warning shots. Despite the legal requirements of the border guards the offenders did not stop. Moreover, one of the runaways, being already caught by the guards, tried to hit the soldier and apply a gas canister. With the help of physical impact the border guards detained the aggressive man.

Four other fugitives and the car of Hungarian registration, arrived to the border, were detained the military personnel of Mukachevo Detachment together with the staff of Vynohradovo Department of the patrol police.