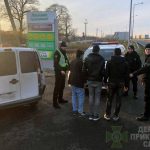 The border guards together with the interacting agencies detained three foreigners intending to get illegally to a neighboring country beyound the check point nearby the Ukrainian-Polish border.

The joint detail of the border guards of the Department Unit “Krakovets” with the representatives of National Police received operational information about three foreigners without documents, who were transported to the border. After a while the law enforcers detained the car with three foreign citizens without documents. According to the detainees, they were the citizens of Afghanistan. As it turned out, the foreigners have already been brought to administrative responsibility for violation of the rules of stay in Ukraine.

The protocols were drawn up as for administrative offense under Part 2 Article 204-1 of AICU “Illegal cross or attempt of illegal state border cross”. The cases will be brought to court.