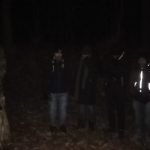 The staff of the State Border Guard Service learned about possible illegal cross of the border beforehand. Soon, the operative subdivisions of the Western Regional Department stopped for check the car of the Lithuanian registration in the suburb of Sokal district. The car was driven by the citizen of Ghana, who had certificate on residence in Ukraine. In addition, it was established that the foreigner had just delivered 4 citizens of Bangladesh to the forest area. The reaction group composed of the border guards of Lviv Detachment and militaries of the SBGS operative departments assisted by the service dog found the traces of the offenders immediately and detained 4 persons. They had no any documents and introduced as the citizens of Bangladesh.

The protocols were drawn up as to the detainees for attempt to cross illegally the state border of Ukraine. so far, they are hold in the Temporary Detention Centre. The protocol was also prepared as to the citizen of Ghana for his violation of the border regime and fine appointment. All details of the offence are under establishment.