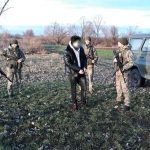 The border guards of the BD “Krakivets’ noticed a foreigner nearby the state border. The border detail asked the man to show his documents and he was running away. However, the border guards soon managed to detain the offender, who was the citizen of Morocco, 1990 YOB. The detainee had no any documents, only the copy of the his passport informational page. In the course of verification it was established that the foreigner arrived to Ukraine this year by plane in legal way and had studied in one of the universities. After his expel he tried to look for a better life in the countries of Europe and illegally crossed the border. The man is apprehended in administrative order and protocol on his attempt to cross the state border was drawn up. A decision on the case will be made by the court.