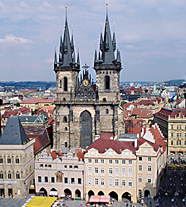 In the course of 8 months of 2014, the flow of asylum applications received by Czech MOI from Ukrainian citizens has increased in twice. 318 applications were submitted, however during the whole year of 2013 the Ministry of Interior registered only 146 such appeals. Thus, the courts considering the applications issue the verdicts that are not capable to satisfy the hopes of the Ukrainian citizens seeking asylum.

Most often it is said about the attempts to use the developed conflict situation in order to stay in Czech Republic.

The most common mistake of Ukrainians is as such – after asylum application submission the foreigner stays legally in the country and has a right for job as well as for social benefits. It is not truth! Now, almost all the time the foreigner stays in the camp to get out of which is almost impossible after application submission for asylum granting.

The center serves to provide with the housing and principal vital things of newly arrived persons seeking asylum. The person is obliged to stay in the centre till the procedure on personality identification and medical examination are completed. Then, the person will be directed to one of the residential camps or he/she can look for the housing himself/herself.

A person gets to this camp if he/she applies for asylum in the transit room of the international airport in Prague. If decision on application is not accepted in the course of 5 days or if the person submits appeal against the negative decision and the court does not make any decision in the course of 30 days, the person will be sent to the camp for refugees’ residence.

It is not allowed to leave the Temporary Stay Centers.

After receiving the reject on asylum, in the course of the few days the second reject in appeal is received, after that there is deportation from the country. It is not a secret that after deportation from Czech Republic (as from any other EU country) the foreigner is deprived of opportunity to come to the countries of European Union for many years even as a tourist.

According to data of Czech Statistic Department, Ukrainian National Diaspora is the largest in the country. About 112 thousand Ukrainians live in Czech Republic.