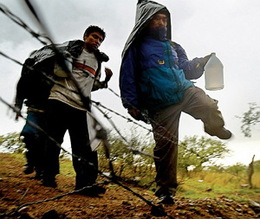 Namely, there is accumulation and formation of groups of the illegal migrants in Transcarpathia with their further smuggling over the state border of Ukraine. This year almost 100 persons were apprehended as illegal migrants.

According to the results of operative and preventive measures, 94 illegal migrants were detained in Transcarpathia. Migration Service of the region made 19 decisions about foreigners’ refoulement to the countries of their origin (7 citizens of Russian Federation, 3 – Armenia, 3 – Azerbaijan, 2 – Hungary, 2 – Georgia, by one from Italy and Uzbekistan), 11 prohibited the entrance to the country. Besides, 273 persons were detected and incurred to administrative liability for committed violation of the rules on stay in Ukraine, including 175 citizens of Russian Federation. Three acts of the foreigners’ violation of the established establishment order. Also, 128 physical persons are incurred to administrative liability, inviting the foreigners and assisting them with the accommodation.
***

Transit smuggling of illegal migrants gains momentums at the present time. According to the information of the experts, tens if not hundreds illegal migrants are transported through the Transcarpathian area of Ukrainian border during the day. Corresponding services apprehended not more than one percent, aiming at reporting.