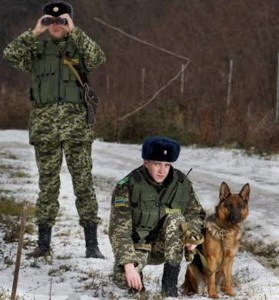 Actions on counteraction to illegal migration at the border on Slovakia presented the first results. Border guards of BS “Uzhgorod” apprehended three migrants from Caucasus. Information about appearance of the men of Caucasian look was received beforehand.

Later on, three unknown persons were detained by forces of task group with the service dog in the distance of 500 m from Ukrainian-Slovakian border.

They reported to the law enforcement agents that they were the citizens of Georgia, however, do any documents they had. Also, the men explained that they decided to have an illegal trip to Germany due to the difficult financial state and absence of job in the country of their origin.

They also said that they were guided by the services of Google maps.

The violators were delivered to the subdivision to establish the circumstances of the infringement and prepare administrative and procedural documents. Decision on responsibility before the law and further destiny of the detainees will be defined by the court.