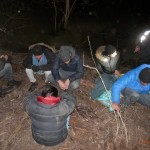 Border guards of Mukachevo Detachment detained a group of illegal migrants nearby the check point “Vilok” at the border on Hungary. There were 8 migrants from Southern Asia. First, alarm device informed about travelers’ appearance. Additional border details arrived to the place immediately. Already in some minutes law enforcement agents detected three men 30 m before the border. In the course of further searching actions border guards apprehended four persons at the border line, and soon – one more. It was established that all of them were travelling by the group, and when approaching the border they decided to separate in order to raise their chances of crossing to the other side. They had no any documents. Seven of them were the citizens of India and from Pakistan. Also, the violators reported their aim of trip was to improve life in one of EU countries.

Border guards inform Hungarian colleagues about detection of illegal migrants, who checking the neighboring border area, did not discover any signs of violation.