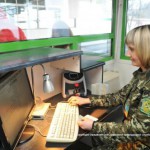 Three violators of the border intending to cross the state border in the check points at the border on Poland and in the Boryspil Airport were detained by the staff of State Border Guard Service. Thus, two citizens of Ghana Republic were detected in the check point “Shegeni” of Mostytskyi Detachment at the walk pass, who had someone’s documents – passports of Ghana and Germany. Protocols were executed as to the man and women (1982 and 1986 year of birth) on administrative infringement in accordance with Article 204-1 Crime Code of Ukraine.

Border guard of Separate check point “Kyiv” detained the citizen of Iraq in the Boryspil Airport, who intended to depart to Tegeran using forged passport. As it was established, false document was sent him by sister from Iraq. Verification measures are conducted as to the citizen.