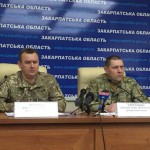 Joint briefing with the participation of executive officers of Mukachevo and Chop Border Detachments took place on February 23. They reported about the following. In the course of the last year the following number of persons was apprehended in the area of Chop Detachment: at Ukrainian-Slovakian border – 207 illegal migrants, and at Ukrainian-Hungarian – 40. Regarding Mukachevo Border Detachment, 508 persons were detained for attempt to cross the state border illegally. It is 8 times more in comparison with 2014. Mainly, these were the citizens of Afghanistan, Georgia, Bangladesh, Sri Lanka, Sudan, Uzbekistan, Nigeria, Russia, Syria, Somalia, etc.