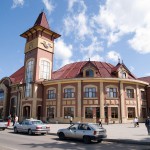 The border guards of Chop Detachment stopped a group of foreigners to check documents at the Uzhgorod railway station. It was a young family from Turkey with four children.

According to the Turks’ words they arrived to Ukraine in the beginning of February through Boryspil Airport, then came to Lvov and afterwards to Uzhgorod by train. The final point of their destination had to be Germany. However, in the course of the document check it was established that their documents as well as visas were forged. The head of the family confessed in his paying for this visa for $300 in Lvov… so far, the Turks are at Chop Detention Centre. The case circumstances are under verification.