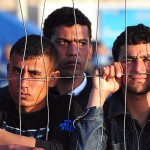 The fortune of visa free regime and Ukraine’s integration to EU is decided in high corridors of Brussels or at the referendum in the Netherlands. The last word may become of the Yagotyn’s residents, where authorities plan to accommodate the first part of 250 Syrian refugees. Kyiv’s goodwill gesture towards EU gains scandalous steams and threatens to put an end to European future of Ukraine.

Building for medical schools and hostels had to be completed thirteen years ago in Yagotyn. Because of country’s poorness the project was put on the shelf and construction fulfilment was handed over from one department to another one until in 2004 it appeared to be on the balance of State Migration Service of MOI.

Unfinished building would stay in such a state if European integration of Ukraine stepped upon the principally new level.

On December 22, 2010 a historical agreement “Action Plan on Visa Regime Liberalization” was signed at the EU-Ukraine Summit. Middling well the bureaucratic machine has been launched and so far there is the Ukrainian President’s Order already in five months (April 22) “About National Plan on Action Plan Realization of Visa Regime Liberalization by European Union”.
A statement for MOI, State Migration Service and Kyiv Regional Administration was mentioned in the Item 22 – “provide operation of Temporary Holding Facility for refugees in the town of Yagotyn”.

A matter on Centre’s creation in Yagotyn was not limited to this document. On August 22, 2012 a decree of Cabinet of Ministers No. 605-r was issued considering the approval of Action Plan on refugees integration into Ukrainian society up to 2020.

It was said that Yagotyn Refugee Centre would be designed for children-refugees, single women and pregnant women as well as for “persons in need of subsidiary protection” in other words healthy men of conscription age and not only.

European Union took the migration heat. Of 232 million residents of the planet (3% of world population) are migrants, majority of them stay in Europe – 72.4 ml. Ethnic uniform space on the level of European countries turns to be a “melting pot” similar to the USA and Canada. Ukraine has also positive migration growth even not being the priority in the international migration flows.

Nowadays, according to the official statistics as to January 1, 2016 there are 251 ths. migrants registered in Ukraine. In 2015 there were 5 111 detained illegal migrants.

It was mentioned in the report of European Commission for 2012 that Ukrainians possessed the first place in the top of those being granted stay permits in EU countries. In the course of the year 204 ths. permissions were issued to them.

It is natural enough that Europe has been waiting for the response steps on the part of Ukraine. Thus, it is not surprising that the State Migration Service reported in September 2015 about Ukraine’s readiness to assist Europe in solving migration crisis and accept refugees at its territory.

Almost all residents stand against the settlement of 250 refugees. It is arguable that motivation and feelings of the town people are representation for the entire Ukraine. Dominating position is a complete non-acceptance of Syrian refugees’ settlement in the town. The descendants of six thousand-year civilization and Bible people – Syrians in Orthodox Ukraine, according to the residents’ words were defined as the source of crime and sanitary dangerous infection.

Somehow true objections were sounded on the higher level of discussion – we have no place to accommodate displaced persons from Donbass, ATO members and here is one more help to refugees.

The representative of State Migration Service while communicating with the Yagotyn people promised European assistance, grants, opportunities for joint language learning by Syrian and Ukrainian children as well as computer classes.

“Everybody has its country” – the resident of Ygotyn tells coming to the town’s meeting. We can’t but agree. Let’s look into the matter honestly.

Is Ukraine a European Country?

It is heard from the parliament tribunes, screens and Mass Media pages that: Ukraine is European country, “Maidan” was for Europe.

It is interesting, God help you if a war starts in Armenia and Ukraine will be filled with Armenian refugees, would we take them to the source of sanitary infection and criminality? How would we look into the eyes of country fellows of Sergei Nigoyan, who was the first to die for European Ukraine? Probably, we think that we are “white” and right migrants, and we shall get a paved carpet walk to Europe. And in the eyes of those Polish people we are still the same “black” and the matter is not in historical prejudices, but in modern religions. We still cannot understand that European liberal ideology has not separated migrants into “white Christians” and “black Muslims” since 1945, wishing so. We are equal. From the side the situations looks like the following – we have a stranglehold on Brussel’s throat begging for visa free regime, signed the ratified bulk of agreements and even laws were adopted on corruption.

Moreover, we have already been given a green light from EU and became the leaders in visas granting. We have been requested just a smidgen – accept 250 Syrians – show us that you share the values with European Union not only in words. And the thing happened.

What Yagotyn is Right in?

Are citizens of Yagotyn guilty in their decision not to admit the migrants? No, they are not. Let us be honest, they – we are, it is me and my neighbors.

Is there much job opportunities in Yagotyn, is local Police able to protect people from “native” criminality, how are the Yagotyns treated in the local hospital and taught in schools? The same as within the entire Ukraine – anyhow.

Generally speaking the resident of Yagotyn are indifferent to “Schengen” – having such salaries and pensions it is hardly enough for the bus to Kiev.

Our authorities, not getting out of “Brussels”, decided that everything is OK and before the elections we will report about visa free regime. It won’t happen.

Surely, money for their keeping is received from EU according to European standards, and not to Ukrainian social ones. Especially, the Centre is planned to be a showpiece. It means that every Syrian family will have income (being unemployed) exceeding the salaried of the Yagotyn residents in several times.

Europe is guilty that Ukrainian government has made its people to be in such a state, that refugees will feel themselves among Ukrainians like Rome patricians among the common people.

On March 11, 2016 modern Ukrainian “Black Council” (Chernaya Rada) takes place, where people  will report their solid “no” to Syrian refugees.

Populists, nationalists, antiglobalists, Ukrainian parties and other persons will join the event. Europe will breathe freely and will not behave being worried much by “Ukrainian problem”. Once there are just racists, so the issue on corruption may be put aside for better times, it will not stand on the way of visa free regime.

And now there is a test for European. Close your eyes and ask yourself quietly – do I wish to have neighbors of 250 refugees from Syria next to my house and their children to attend the school with mine?