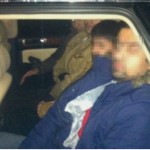 Police apprehended four illegal migrants being involved in car accident nearby the Hungarian border. As it was reported by law enforcement agents, four illegal migrants from Afghanistan intended to reach the territory of Hungary through the Ukrainian border. They were transported by car. The driver failed to control the car properly not far from Ukrainian-Hungarian border nearby the village of Batevo and cut into the tree. The smuggler escaped and left the wards at the place of the accident.

The law enforcement agents established that the men stayed on the territory of Ukraine illegally. They introduced themselves as the citizens of Afghanistan. One is 26 and the other – 22 years old. Two other passengers refused to tell any information about themselves. The migrants were sent to Mukachevo Border Detachment, and their cars were delivered to special place of Berehovo Police Department. The driver is searched.