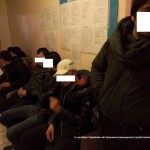 Seven foreigners violating Ukrainian legislation were apprehended in Kyiv at the Central Railway Station by the border guards of Separate Check Point “Kyiv” together with the representatives of SSU, National Police and Migration Service.

In the frames of planned inter-agency raid performance on detection of illegal migrant there were 7 natives of Uzbekistan, Vietnam, Syria, Afghanistan and Algeria without corresponding documents. Two persons had not documents at all, the rest showed only the certificates and copies of the documents for temporary residence. Detainees were passed to Migration Service for identification and establishment of infringement circumstances.