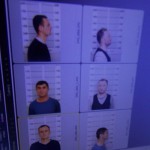 Border guards of Chop Detachment together with the staff of National Police detained three citizens of Georgia at the railway station Batevo, which is 5 km from state border on Hungary.

During the document check by the inspector of Border Guard Service the Georgians told that they arrived to border town to meet some woman. Inspector stayed with migrants to see her also. However, the documents of the foreigners were in good state, the absence of the woman became a base of their arrival to the railway station, who aimed to cross the state border soon beyond the check point. Later on it was established that three friends came to Kyiv a week before. So far, the administrative documents are drawn considering them.