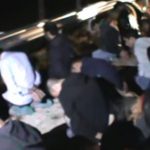 The next resonance detention took place not far from Transcarpathia – in Hungary. There a group of Ukrainians was apprehended transporting migrants to the EU countries. Hungarian Police arrested five Transcarpathians being suspected in migrants’ smuggling during the transportation of 25 migrants from Pakistan and Afghanistan towards Austria.

It was reported at the website of Hungarian Police. The migrants were in one of two minibuses with Lithuanian number plate, which was stopped at night at the Sombatkhey highway, about 15 km before  Austria. Detainees were delivered to Police Department of Sombatkhey for interrogation.