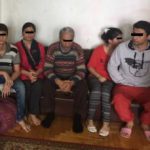 Six migrants from Afghanistan were apprehended in the course of operative actions conducted by the border guards of Chop Detachment together with the representatives of National Police. According to the court decision a search of private property was made in Uzhgorod. Operative agents received information about the place of travelers’ stay. Currently, there are further filtering measures are undertaken on looking for possible persons involved in smuggling the Afghan citizens to the EU.

Note that active measures are continued in the State Border Guard Service aiming to expose the channels of illegal migration. Overall, since the beginning of operation “Border-2016”, which lasts from April, more than 100 illegal migrants were apprehended while trying to get over the state border.