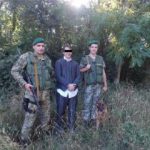 NATIVE OF CHECHNYA WAS GETTING TO UKRAINE FROM SLOVAKIA

Border guards of Chop Detachment detained illegal migrants early in the morning when performing patrolling. The violator was apprehended by the reaction group after alarm system actuation 100 m before the border. Detainee, being travelling beyond the check point from Slovakia, had no any documents. During the interview the man reported to be the native of Groznyi, DOB 1977. In the course of the meeting with the border guards of Slovakia, the fact of border crossing was confirmed. Documents on administrative infringement were prepared and passed to the court.