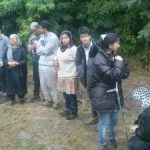 The staff of State Border Guard Service detected 8 illegal migrants intending to reach neighboring Hungary in unlawful order. The violators were revealed by border detail of BS “Kosyno”, Mukachevo Detachment when they performed monitoring of the border. It was managed to apprehend them due to coordinated and consolidated actions of the border guards, which allowed them to prevent the attempt of illegal cross of the state border.

It should be marked that the seekers of better destiny were detected 20 m before the state border by the army conscript being a part of patrol. According to the words of disclosed persons, all of them were natives of Afghanistan. The travelers reported about their plans to get illegally to Hungary in order to arrange their further life in one of EU countries. So far, 4 men and 4 women are delivered to Border Service Department.