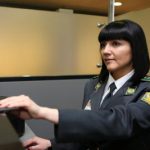 The staff of State Border Guard Service detected 4 violators in the airports of Kyiv and Odesa during the verification actions, who intended to pass passport control with forged documents. Thus, three citizens of Georgia provided false documents in the course of passport control in the international Boryspil airport. During the verification procedure it was established that family – father, mother and daughter, travelling by one flight to Switzerland – had forged visas.

One more foreigner with false passport was disclosed by the border guards of Odesa Detachment in the check point “Odes-air”. While passing the passport control border guards established that document provided by the citizen of Tadzhikistan – was falsified, namely the owner’s picture and informational page were substituted.