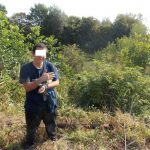 Border detail of Chop Detachment detained a violator nearby Ukrainian-Hungarian border, who was getting through the bush woods to Ukraine beyond the check point. The man without documents was apprehended some meters before the border line. He introduced himself as the citizen of Armenia. He also explained that he had resided in France, however, he made a decision to return home. His documents were as if stolen and he attempted to cross the border in illegal way, and then further to Armenia. The violator was delivered to Temporary Detection Centre for clarification of circumstances of the infringement, identification and drawing up administrative and procedural documents.