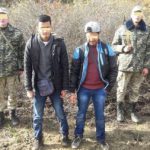 Border detail of BS “Kosyno”, Mukachevo Detachment, composed of military service short-term hires, apprehended two violators without documents 50 m before the border. According to their words it was learned that they travelled from Bangladesh. Besides, in the course of the interview one of the detainees offered an improper advantage in the amount of $ 1000 for the border guards not to make an obstacle during the further unlawful journey. Military staff refused the bribe, and the detainees were delivered to Border Department “Kosyno”. The representatives of National Police were informed about the bribe fact and sent a notification about revealing the criminal offence signs stipulated by Article 369 of Crime Code of Ukraine.

Also, border guards of above mentioned department were provided with information by local residents about appearance of foreigners within the border area, soon 3 migrants from Guinea, Cote d’Ivoir and Cameroon were detained and delivered. Two of them had o any documents, one refugee had certificate of temporary residence in Ukraine. According to the words of the travelers, all of them were seeking better life in the member-states of EU.