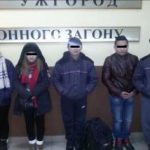 State Border Guard Service in cooperation with law enforcement agents continues actions against illegal migration. Five migrants from South-Eastern Asia were found in the town of Uzhgorod in the frames of operative actions performed by the border guards of Chop Detachment together with National Police, who were hiding in the private house. It was established during the check that three men and two women did not have documents, according to their words they were natives of Vietnam. According to preliminary data they intended to reach one of EU countries. So far, measures are undertaken to identify detainees and search persons involved in unlawful activity. One more foreigner without documents, according to his words – citizen of Iraq, was detained at night nearby the border by the border guards of Mukachevo Detachment. Detainee was delivered to Border department for identification.