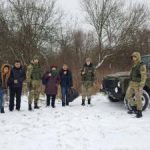 The family of illegal migrants from Syria and citizen of Turkey were detained by the border guards of BS “Shegeni”, Mostytskyi Detachment, close to Ukrainian-Polish border. In the morning the district inspector of Border Service together with the representative of Local Public Border Control Unit apprehended three citizens of Syria – a husband, wife and their minor son. Besides, close to the place of detention a trespasser from Turkey was revealed in some minutes. The border guards caught him when he got over the barrage fence at the border. Evidently, all detainees reckoned upon snowstorm not leaving the tracks to avoid the check point and reach neighboring Poland. The operative actions are also continued with regard to the persons identification probably involved in organization of their joint transportation over the border. Currently, the citizens are apprehended in administrative order aiming at their further identification and holding responsible for attempt to cross the state border of Ukraine.

One more traveler was detained by the border guards due to operative information in the distance of one kilometer before the border. as it was soon established the violator had passport for travelling abroad of the citizen of Algeria. Also, it was clarified that he had lived in Ukraine for a certain time as a student of capital’s educational establishment and had permission for temporary residence in Ukraine. The men confessed in his wish to find better destiny in one of EU countries. Protocol was issued for the “student” as to Article 204-1 of Administrative Infringement Code of Ukraine. Decision on making violators accountable will be made by the court in future.