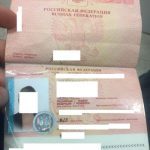 Border guards discovered a passenger with forged passport in the Boryspil Airport arrived from Athens. The woman provided the passport for travelling abroad of the RF citizen while checking in, which contained the signs of falsification. The passenger reported to be the citizen of Kyrgyzstan. In a result, the forged passport was confiscated and the woman got a ban to enter Ukraine for a period of 3 years. The passenger will be returned by a back flight to Greece.

It will be recalled that the border guards of Separate Check Point “Kyiv” discovered a false document in a passenger arrived from Stockholm. It was established that the woman presented partially forged passport for travelling abroad of the citizen of Lithuania. As it became clear she also had the passport of Ukrainian citizen. Protocol was prepared as to the violator in accordance with the Article 204-1 (Illegal cross of the state border of Ukraine). also notification about the violator was send to Police.