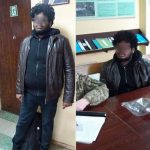 Border guards of Chop detachment detained the citizen of India in the course of verification actions. The law enforcers detected 20-year-old Asian nearby the railway station, who had no any documents identifying his personality and legality of his stay within Ukraine. As it is established, the young man studies in one of the higher educational institutions in Kyiv. According to his explanations, he arrived to Transcarpathia to visit his brother. Upon preparing corresponding procedural documents, the detainee was delivered to Temporary Detention Centre of Chop Detachment to identify and bring to administrative responsibility.