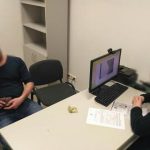 Border guards stopped a citizen of Georgia in the Boryspil Airport, who attempted to bribe for unobstructed entrance to Ukrainian territory. During the procedure on documents verification mentioned citizens, DOB 1978, could not confirm his aim of the trip. Besides, the men tried to influence upon the SBGS officer’s decision as to his non-admission and offered him $40 bribe. The foreigner was not passed through the border and returned by a back flight.