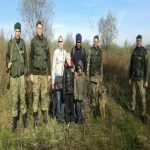 The citizen of Turkey and woman from Ukraine intending to cross illegally the state border with minor children were stopped by the border guards of Mostytskyi Detachment. Information about unknown persons’ appearance nearby the populated area of Shegeni check point was received by the border guards from local residents. Border detail arrived to the immediately and detained the specified citizens. When establishing the persons it was learned that the man was the citizen of Turkey, and woman – the mother of two children from Mykolaiiv region.

As it was clarified, arriving to Ukraine in the beginning of the year the man acquainted with the woman via social networks and then planned to get to one EU countries in illegal way looking for better life. Mentioned persons were delivered to border subdivision to establish the circumstances and drawing up administrative documents.