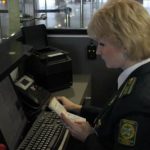 Border guards of Separate Check Point “Kyiv” in the Boryspil Airport did not pass the citizen of Iran, who attempted to cross the state border of Ukraine by forged document. Thus, when performing selective verification of the passengers from the flight “Tegeran-Boryspil-Berlin” in transit zone, the border guards reaveled Iranian with forged French passport document for travelling abroad. During verification actions it was established that the foreigner aimed to improve his living conditions making his way by transit to Boryspil taking personal foreign passport of Iran, where during the transfer to Germany he identified himself by document packet purchased in France. The citizen was not passed through the border and returned by a back fligh to the country of origin.