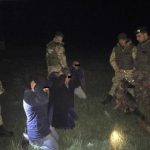 Border guards did not admitted illegal violation of Ukrainian-Polish state border by three “seekers of better destiny”. Border detail of BD “Krakovets” by means of surveillance device group noticed the movement of unknown persons towards the border. The silhouettes of potential border violators were noticed by regular soldiers, guarding the border area adjacent to the international border checkpoint. Watching the travelers, border guards called for the reaction group and detained unknown persons 70 before the state border. Detainees were the citizens of Turkey having documents (YOB 1966 and 1981). The third one had German identification document of stateless person being also the citizen of Turkey. Also, the border guards of Mostytskyi Detachment a path of track in the control line from Poland to Ukraine and in the course of detainees’ shoes identification it was established that native of Turkey came from abroad to take his country fellows. All citizens are detained in administrative order and in future will be called to responsibility for attempt of illegal cross of the state border of Ukraine. Besides, these circumstances are examined with regard to clarify the possible involvement of Turkish migrant in assistance to illegal transportation through the state border of Ukraine of other detainees.