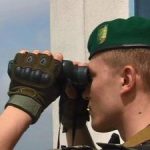 Ukrainian border guards together with law enforcers of neighboring countries continues to resultively cooperate in fight against illegal migration at the border in the course of joint special border operation “Border-2017”. Thus, in a result of cooperation and information exchange with Hungarian collegues, the border guards of Mukachevo Detachment apprehended three persons nearby the border area in Transcarpathia. First, the border guards of BD “Goronglab” detected one person some metres before the state border. yet, in some minutes after Ukrainian’s detention, border guards noticed two unknown persons making their way over the barrage fence at the border. border detail arrested the travelers, who were the foreigners. They had no any document and reported to be the citizens of Somalia. So far, the violaters are detained for establishment of all circumstances of attempt to cross the state border.