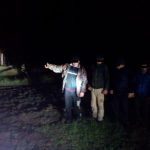 The staff of Luhansk Border Guard Service in cooperation with the SSU detained a group of persons attempting to enter Russian Federation. Received information from SSU about possible violation of the state border by persons was performed during the joint actions by the representatives of Security Service of Ukraine, the National Police and Force Support Group of Operational Border Service Unit at night. Five unknown persons were arrested in the area of the village Bagachka, Lugansk region, 200 meters before the state border.

In the course of verification and filtration activities filtration it was found that three of them were the citizens of Ukraine, who tried to smuggle illegal foreigners, two of them were the citizens of Turkey and Azerbaijan attempting to reach the neighboring country. It should be noted that foreign citizens arrived to Ukraine in order established by the law. Currently, the protocols are drawn up as for attempt to violate state border, cases are forwarded to the court. In addition, a criminal proceeding is performed on this fact on the basis of the Article 332 of the Criminal Code of Ukraine (Illegal transportation of persons through the state border of Ukraine committed on previous concert by group of persons as to some persons).