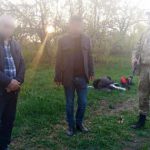 During the day the staff of State Border Guard Service detained 3 violators from Azerbaijan. Two persons were stopped in Sumy region. They were apprehended in the course of information processing received from district inspector of Border Guard Service. The reaction group of Sumy Detachment started to the place immediately rereleased the violators not far from the state line in the direction between Ukrainian and Russian villages. Two citizens of Azerbaijan were almost ready to cross Ukrainian-Russian border beyond the determined check points. In the course of filtration measures the border guards established that men of 48 and 31 years old were forbidden to enter Russian Federation and due to this reason they planned to cross the border. So far, appropriate administrative materials are prepared as to both violators for attempt to cross the state border of Ukraine in illegal way. In addition, decision was made on compulsory return of the foreigners and ban to enter Ukrainian territory for the period of 3 years.

One more citizen of Azerbaijan was apprehended by Kharkov border guards. He found late in the evening close to the border. He did not have any documents. Currently, the person is under identification.