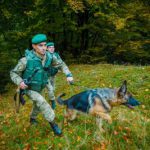 The staff of State Border Guard service detained 1059 illegal migrants during six month of the year 2017. Of them 314 persons were detained for illegal border cross, the rest – for violated stay rules of Ukraine by the foreigners and so on.

In accordance with the statistics, there were citizens of Moldova, Russia, Georgia, Turkey, Azerbaijan, Bangladesh, Vietnam, India and Armenia among the illegal migrants.

Besides, almost 2 thousand potential migrants were not admitted to Ukraine.