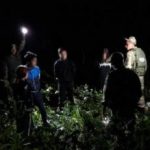 The State Border Guard Service of Ukraine has successfully completed the operation at the border on Slovakia focused on discrediting and liquidation of illegal migration channel consisted of the citizens of Vietnam. The channel was revealed by the staff of SBGS, National Police in close cooperation with Slovakian Border Police. Yet, in the beginning of August, the operative agents of Border Department of Ukraine together with the Head Administration of Transcarpathian National Police involving Slovakian border guards, collected information about offenders’ intentions to smuggle a large group of illegal migrants to the countries of European Union. In order to liquidate the activity of this channel, the law enforcers of both sided planned the appropriate measures as for this group. The operative agents were constantly following the group formation and step-by-step transportation of the foreigners to the border area. In particular, there were some persons attempting to cross the border before in the composition of other groups and those who entered Ukraine on legal basis, but afterwards had decided to look for the better destiny beyond Ukraine. When migrants accumulated nearby the border, the organizers changed not once the day and direction, where the border crossing should take place. All this was done for the law enforcers to be unable to track the route of illegal trip. However, the offenders failed to realize their plan and, on common intent, the group of 24 citizens of Vietnam was detained by the border guards of Slovakia directly after their crossing the Ukrainian – Slovakian border. Currently, the law enforcers perform further investigation measures on the territory of Ukraine and Slovakia to expose all organizers of the channel and their accomplices.