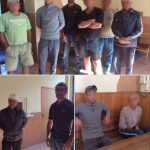 In the course of patrolling the law enforcers at the road “Mukachevo-Berehovo” stopped the car with six foreigners. Only two of them had documents. Legality of their stay within Ukraine is under establishment. In the frames of operation “Migrant” the policemen of Road Control department stopped the car «Volkswagen Passat» of foreign registration. There were six foreigners in the car. One of them had passport of the citizen of Ukraine, the other – temporary residence certificate of Ukraine. The rest four persons had no any documents. Illegal migrants reported that they arrived to Transcarpathia in the search of job; they lived for some period in Berehovo district. Currently, the policemen with the staff of State Migration Service verify the legality of the foreigners’ stay on the territory of Ukraine.