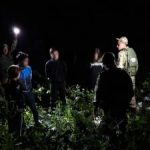 State Border Guard Service of Ukraine pays constant attention to efficiency raise as to fight against the organized criminality at the state border and counteraction to illegal migration.

The results of operative-service activity testify this fact. Besides, in the course of the last 2 years there were 20 thousand orders performed authorised by state bodies and 60 thousand protocols drawn for illegal cross of the state border.

In addition, counteraction to illegal migration has been sufficiently enforced. During the six month of 2017 border guards apprehended 320 migrants for violation of the “green corridor” and discredited quite many directions of their smuggling. Regardless of periodical activation of different channels, namely from Vietnam, India, Afghanistan and Syria, the migration station in Ukraine currently does not present any substantial threats to border safety. The resolution of the last is confirmed by European institutions organizing the protection of exterior EU borders.

At the same time it is worth mentioning that changeable situations as to the flow of illegal migrants through the territory of Ukraine to the countries of Western Europe was affected by the troublesome daily work of the  border guards. Since the times of Ukraine’s Independence more than 120 thousand such “travellers” were detained  for attempt to cross the state border.

As a rule, for the illegal migrants to travel  within Ukraine the means of legal entrance the country by real documents are used for studying, tourism, business, private goals. Then, their further movement is organized to the western border area in order to cross the border in illegal way.