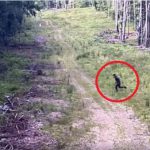 Police of Slovakia has published new videos from the cameras installed at Ukrainian-Slovakian border.

Unsuccesful attempts of illegal migrant to cross the border from Transcarpathia in direction to European Union were captured at the shots. It will be recalled that last year it was announced about installation of 53 surveillance cameras at Ukrainian-Slovakian border. Vidoe can be watched following the link.