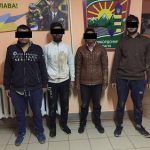 In the frames of special joint operation “Border-2017” in Transcarpathia the border guards detained 4 illegal migrants, who planned to cross the state border of Ukraine in illegal way. Thus, the border guards of Mukachevo detachment of BD “Vilok” together with the staff of Berehovo National Police Department detained 4 unfamiliar persons in one of the houses in Podvinohradov town. The foreigners confessed to be the citizens of India, however, they did not have any documents.

Currently, the detainees are delivered to Border Department “Vilok” for their identification and drawing up appropriate documents with regard to their attempt to cross the border.

It should be remind that for the previous day the border guards of BD “Bolshaya Palad” of the same detachment apprehended four more citizens of India during their attempt to cross the Ukrainian-Hungarian border nearby the populated area Bolshaya Palad, Vynohradiv district, Transcarpathian region.